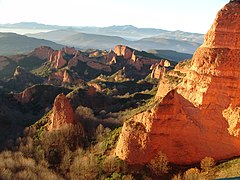 Eastern South Dakota generally features higher precipitation and lower topography than the western part of the state. Smaller geographic regions of this area include the Coteau des Prairies, the Dissected Till Plains, and the James River Valley. The Coteau des Prairies is a plateau bordered on the east by the Minnesota River Valley and on the west by the James River Basin.  Further west, the James River Basin is mostly low, flat, highly eroded land, following the flow of the James River through South Dakota from north to south.The Dissected Till Plains, an area of rolling hills and fertile soil that covers much of Iowa and Nebraska, extends into the southeastern corner of South Dakota. Layers deposited during the Pleistocene epoch, starting around two million years ago, cover most of eastern South Dakota.  These are the youngest rock and sediment layers in the state, the product of several successive periods of glaciation which deposited a large amount of rocks and soil, known as till, over the area

The Great Plains cover most of the western two-thirds of South Dakota. West of the Missouri River the landscape becomes more arid and rugged, consisting of rolling hills, plains, ravines, and steep flat-topped hills called buttes. In the south, east of the Black Hills, lie the South Dakota Badlands. Erosion from the Black Hills, marine skeletons which fell to the bottom of a large shallow sea that once covered the area, and volcanic material all contribute to the geology of this area. 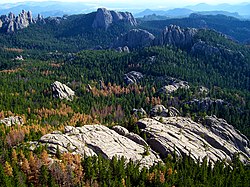 The Black Hills, a low mountain range, is located in Southwestern South Dakota.

The Black Hills are in the southwestern part of South Dakota and extend into Wyoming. This range of low mountains covers 6,000 sq mi (16,000 km2), with peaks that rise from 2,000 to 4,000 feet (600 to 1,200 m) above their bases. The Black Hills are the location of Black Elk Peak (7,242 ft or 2,207 m above sea level), the highest point in South Dakota and also the highest point in the United States east of the Rocky Mountains.  Two billion-year-old Precambrian formations, the oldest rocks in the state, form the central core of the Black Hills.  Formations from the Paleozoic Era form the outer ring of the Black Hills; these were created between roughly 540 and 250 million years ago. This area features rocks such as limestone, which were deposited here when the area formed the shoreline of an ancient inland sea. 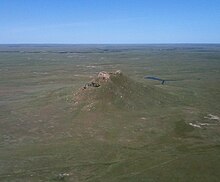 Much of western South Dakota is covered by grasslands and features buttes such as Thunder Butte, shown above.

Much of South Dakota (except for the Black Hills area) is dominated by a temperate grasslands biome.  Although grasses and crops cover most of this region, deciduous trees such as cottonwoods, elms, and willows are common near rivers and in shelter belts.  Mammals in this area include bison, deer, pronghorn, coyotes, and prairie dogs. The state bird, the ring-necked pheasant, has adapted well to the area after being introduced from China.   Growing populations of bald eagles are spread throughout the state, especially near the Missouri River.   Rivers and lakes of the grasslands support populations of walleye, carp, pike, bass, and other species.  The Missouri River also contains the pre-historic paddlefish.

Story:  Birding expedition by The Write Side

We began at 6:50 a.m. on Saturday, February 22nd, 2020 from our home in Madison, (Lake County) South Dakota. The sunrise was at 7:11 a.m. and we were hoping to get some good pictures of the sunrise as we headed out of town. On the highway near our old farmhouse we first saw a Great […]

via first birding expedition 2020 — The Write Side