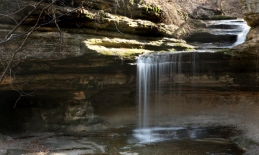 All year round, plan to be surprised and awed at the spectacular natural features found here at Starved Rock in Illinois.

Surrounded by the flat, seemingly endless fields of Illinois farm country, a totally different topography is found within the park. Starved Rock was formed thousands of years ago by the melting of glaciers releasing torrents of water. As the water rushed downstream it eroded and stripped away everything in its path except the resistant St. Peter sandstone. It is that sandstone that formed the steep rock walls and the cool dark valleys of the eighteen canyons. When conditions are right cascades of falling water spill down into these gorges, creating the waterfalls so many come here to enjoy.

WATERFALLS
Although you can technically see waterfalls in 14 of the 18 canyons, some of the most scenic waterfalls are found in St. Louis, French, Wildcat, Tonty, Ottawa and Kaskaskia canyons. The best times to see waterfalls are in the spring when the snow and ice melt or after a heavy rainfall.

ICEFALLS
Winter brings a whole new life to the canyons. The freezing and melting that happens during this time of year creates amazing ice sculptures in the canyons. Make sure you come back in the winter to see an icefall – they are spectacular!

600 million years ago Northern Illinois was part of a broad upland that was undergoing extensive erosion. The erosion wore
the land down to near sea level. Erosion that forms a near sea
level surface is called a peneplain. This peneplain was submerged several times by sea water and several layers of sediment were laid on the surface.
Starved Rock State Park was once covered with 3000-5000
feet of glacial ice on and off over a course of 700,000 years.
Glacial ice can move forwards never backwards. When a glacier is said to be retreating, it is actually melting faster than it is
moving forward. As glacial ice can only move forward, it picks
up rocks and carries them in the ice. When the ice melts, these
rock particles are dropped at the point of melting. All dropped
rock material is called drift. Drift found at the point of melting is
called till. Till is unsorted glacial drift. When the glacier is stagnant, the drift accumulates into a pile called an end moraine.
After the glacier has retreated, it leaves a range of irregular hills
which are the end moraine. The melt waters of the glacier were
so great that they would accumulate behind the moraines and
form vast lakes. The streams that drain these lakes were gigantic compared to today’s streams. The Illinois Valley was
formed by one of these streams.
15,000 years ago during the Wisconsinan Glacial Age, the glacial meltwater of a large lake overtopped the Marseilles Moraine and formed Lake Ottawa behind the Farm Ridge Moraine
that ran north to south along what we call Starved Rock State
Park today. This lake drained when it overtopped the Farm
Ridge Moraine cutting a channel that became the Illinois River.
Repeated meltwater floods of the Kankakee Torrent poured
through the channels cut through the Marseilles and Farm
Ridge Moraines establishing the drainage for the Illinois, Fox,
and Vermillion Rivers. This repeated drainage also cut the outcrops , overlooks, and 18 canyons that you see today.

OTHER PLACES TO VISIT!!