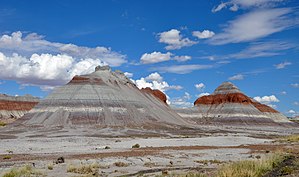 Although a bit west of what is considered the tradition Midwest, Petrified Forest National Park is an American national park in Navajo and Apache counties in northeastern Arizona. Named for its large deposits of petrified wood, park covers about 230 square miles, encompassing semi-desert shrub steppe as well as highly eroded and colorful badlands.

The Petrified Forest is known for its fossils, especially fallen trees that lived in the Late Triassic Epoch.  The sediments containing the fossil logs are part of the widespread and colorful Chinle Formation, from which the Painted Desert gets its name.

Panorama of shortgrass prairie near Dry Wash in the southern section of the park.

Some of the larger animals roaming the grasslands include pronghorns, black-tailed jackrabbits (hares), Gunnison’s prairie dogs, coyotes, bobcats and foxes. Bobcats and bullsnakes hunt smaller animals, such as deer mice and white-tailed antelope squirrels in the park’s riparian zones.  More than 16 kinds of lizards and snakes live in various habitats in the park.